There is no doubt that one of the biggest draws of Paris for me was the food. I mean, come on. It’s a food culture practically built on bread and cheese, two of my most favorite food groups.

As I mentioned, I went to Paris with a pretty comprehensive list of places to eat that covered everything from hole-in-the-wall falafel stands to old school French bistros to small plates and wine bars. These are just three of best places I ate during the trip (another post to come shortly with more, but I figured 1,500 words was quite enough to start with): Au Petit Versailles, an amazing cafe; Breizh Cafe for spectacular crepes and cider; and Le Baron Rouge for wine and oysters. 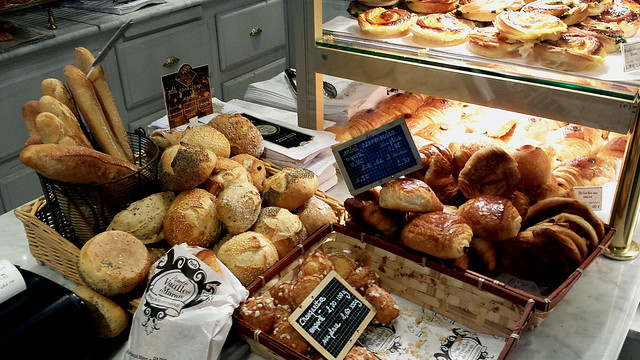 Au Petit Versailles du Marais
Finding this place was an auspicious start to the trip. We were hungry, wandering from our hotel toward Notre Dame and stumbled on this very pretty little cafe/boulangerie/patisserie for lunch. It looked and smelled like everything you’d hope and imagine a little Parisian cafe to be: piles of crusty breads, flaky little pastries (sweet and savory), desserts of all kinds shiny with sugar glazes, the most gorgeous quiches I’ve ever seen.

I managed, with a lot of pointing, to order quiche filled with potatoes, mushrooms, and cheese–it was quite possibly the best quiche I’ve had in my life. And since the first meal in Paris wouldn’t be complete without dessert, a slice of custard-y apple cake. Later in the trip, I also got my first Parisian croissant, plus a mini Nutella croissant and a chouquette (an unfilled cream puff rolled in pearl sugar) here. 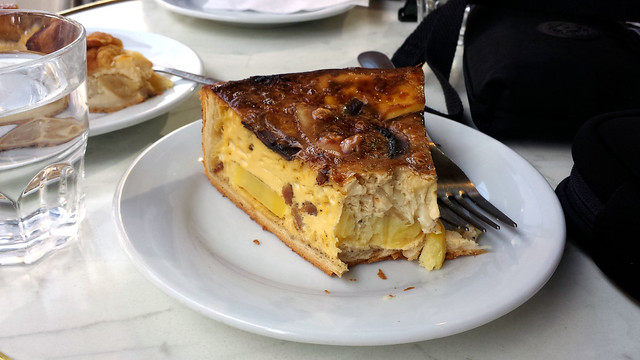 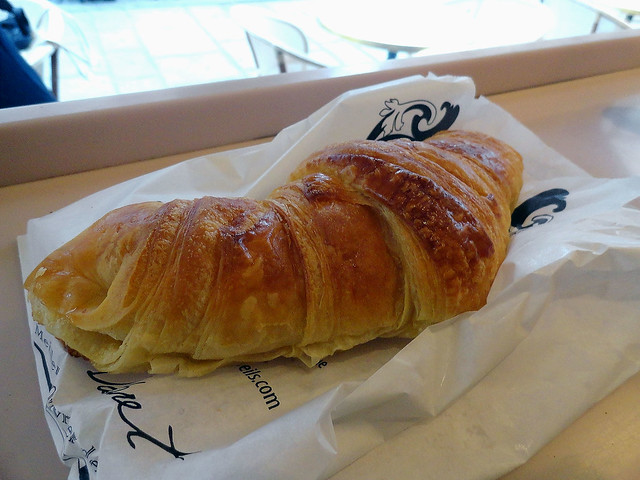 Here’s what made this place such an auspicious first meal and, to be honest, set the tone for the rest of the trip: later in the first day I wanted to pick up a baguette. I remembered a place from my research that was voted the second best baguette in Paris and I knew it was close to the hotel. Do you want to guess where it was? And it truly was a spectacular baguette–the perfect mix of crispy and chewy, not too dense, not too light. I can’t imagine what the first place winner could have done better. 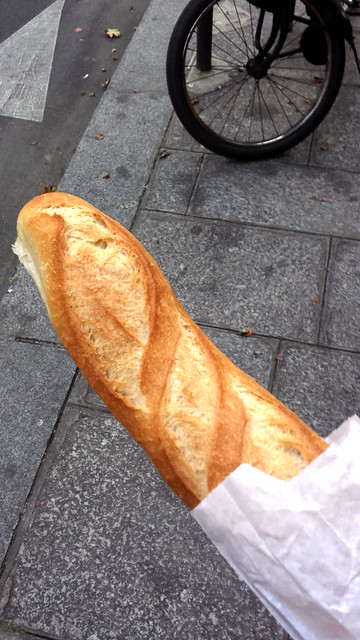 Breizh Cafe
I’m sure I broke some unspoken rule of a first visit to Paris by eating at a place more than once, but both Au Petit Versailles and Breizh were too good to only visit once. This crepe restaurant was recommended no fewer than four times by people I know personally who’ve been there and by other food writers. Not only did I love the food and drinks, I came home with their cookbook. 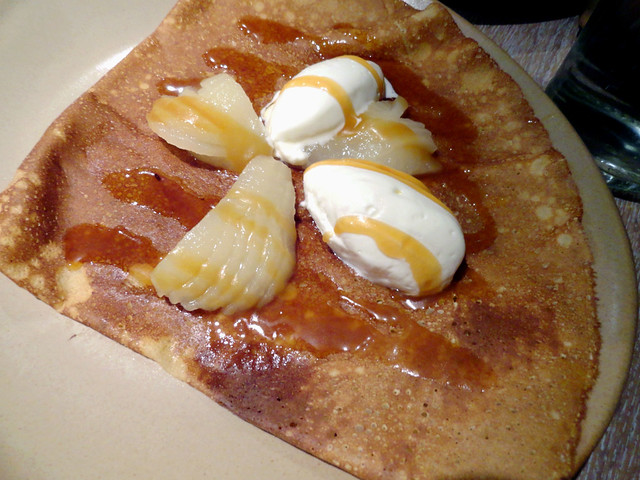 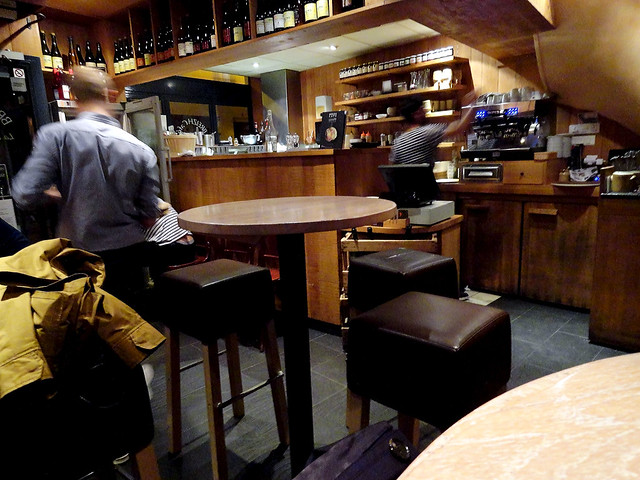 Since this was only a few minutes’ walk from the hotel, it made a convenient spot for Friday night’s dinner when I honestly felt like I could not walk one more step. The space was casual and cozy and the waiter was a sweetheart (who very kindly spoke English and gave us English menus). The cafe is known not only for their Breton crepes and galettes (savory crepes made with buckwheat flour), but also for a huge variety of hard ciders (also a specialty of Breton). 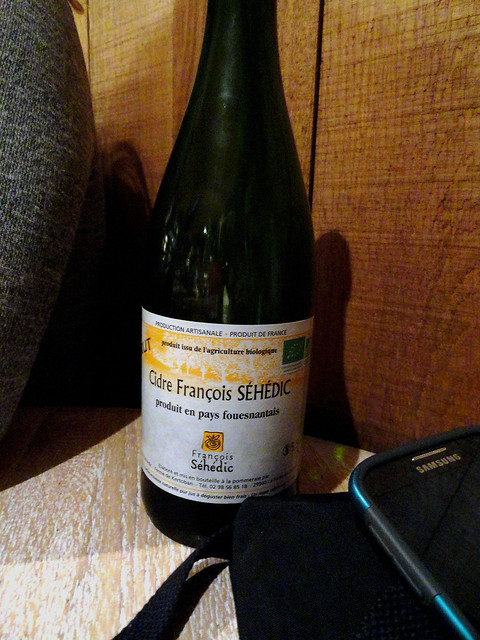 Over the two meals we had there, we ordered two different kinds of ciders–both excellent and much less sweet than any hard cider I’ve had in the US; the second bottle, recommended by our waiter as his favorite, was actually very smoky and unlike anything I’ve tasted.

When it came to dinner, I ordered one of the specials with leeks and scallops while Pam had one of their standards: ham and cheese (oh so much delicious, gooey cheese). The galette was slightly crispy at the edges, the leeks (very similar to the leek butter I made a few weeks ago) cooked with some very delicious creamy…something (I think another kind of cheese), the scallops perfect and buttery. 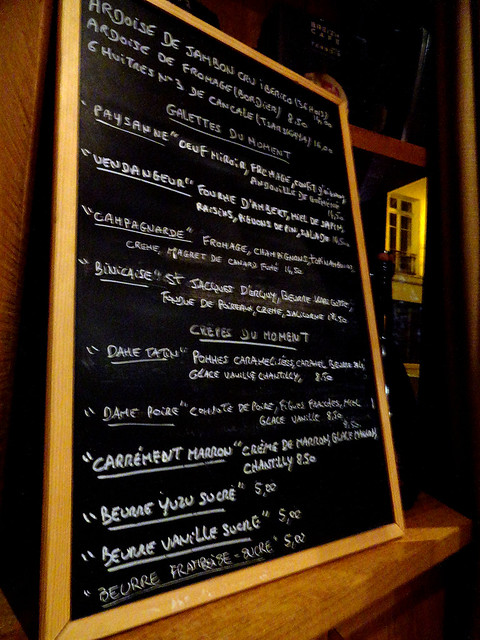 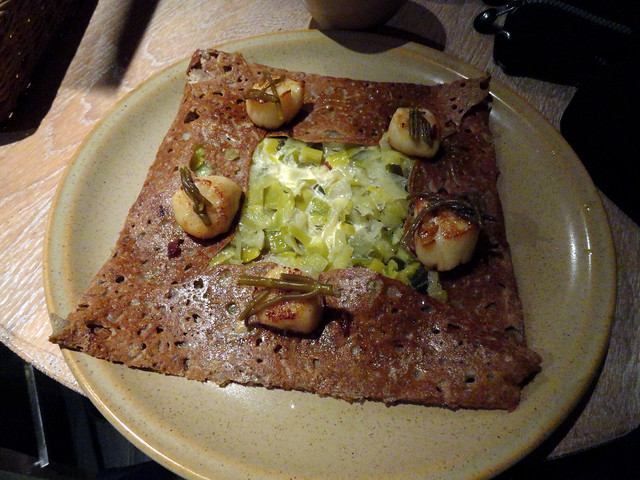 At our next dinner there on Sunday, I managed to snag the special they had run out of on Friday: a galette with smoked duck breast (I’m a complete sucker for anything with duck), Jerusalem artichokes (also called sunchokes), mushrooms, and cheese. It was amazing and the duck was a perfect complement to the smoky cider. Pam, craving some vegetables, ordered a galette with a simple mix of sauteed vegetables and a sunny side up egg. It was good and garlicky, the runny egg yolk making a rich sauce for the vegetables. 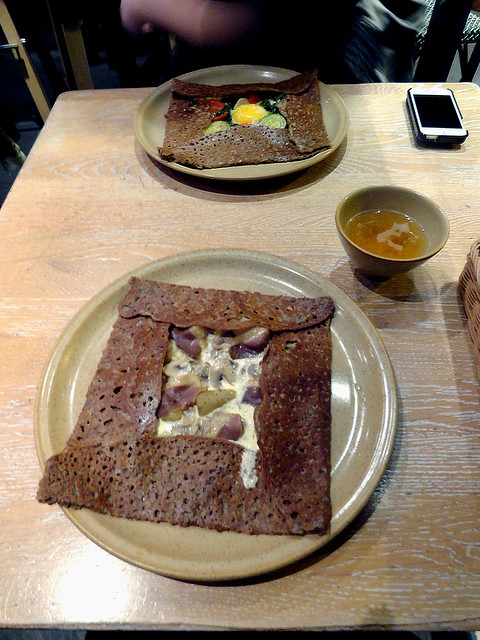 Of course I had to have dessert. Between the two meals, we ordered three sweet crepes. The first was as simple as it gets: a crepe topped with Breton’s specialty butter and sugar. It was still warm when it came to our table, the butter slowly melting into the crepe, the sugar providing a slight crunch. God was it good.

Next was a seasonal crepe with poached pears, salted butter caramel, and gorgeous dollops of the best whipped cream I’ve ever tasted; it was every bit as good as it sounds and my favorite of the three. And finally, a second seasonal specialty, a crepe topped with a sweet chestnut puree, chestnut ice cream, and more of that whipped cream (I’m also a sucker for anything with chestnuts). 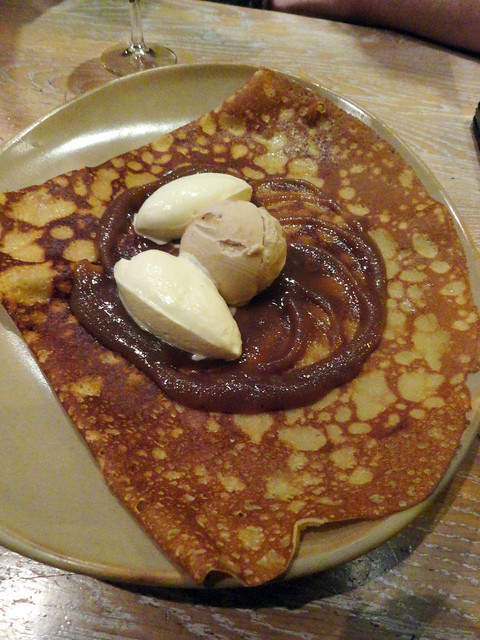 Le Baron Rouge
It’s really hard to do justice to Le Baron Rouge, in terms of both food and atmosphere. We ate our lunch-18 fresh, perfectly briny oysters plucked from wooden baskets and shucked while we watched, a bottle of wine, a basket of bread, a few pats of butter–standing at a big upturned wine barrel while our dining neighbors, a group of four big Frenchmen in their 60s, piled plate after plate of oysters, tumblers of tiny whole shrimp (heads, shells, and all), and bottles of wine on the makeshift table. 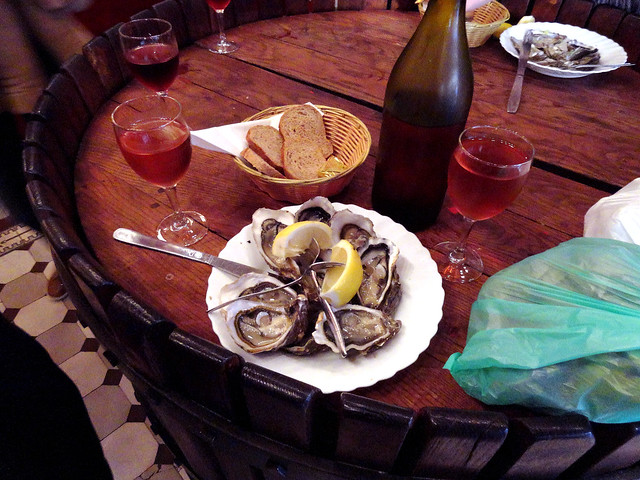 We wandered into this little hole in the wall spot after a stroll through the Marche d’Aligre, an outdoor farmers market near the Bastille. The first thing we noticed were at least a dozen people standing around outside, plates of oysters and bottles of wine balanced on any available surface–windowsills, cars, trash cans. 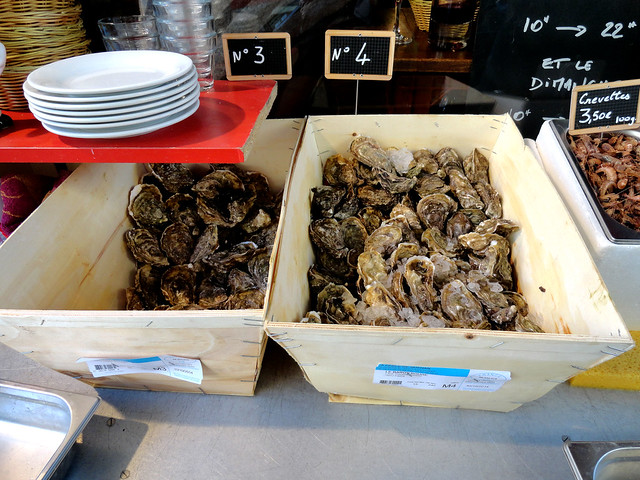 Baskets of oysters in varying sizes were being shucked quickly and efficiently by two obvious experts with something that looked like a giant paper-cutter. Inside, several large wine barrels with taps were available for customers to buy bottles of wine. A few tables were tucked in the back next to a small bar, with people sitting or standing wherever they could find room to enjoy plates of charcuterie, cheeses, and other small plates along with the oysters. 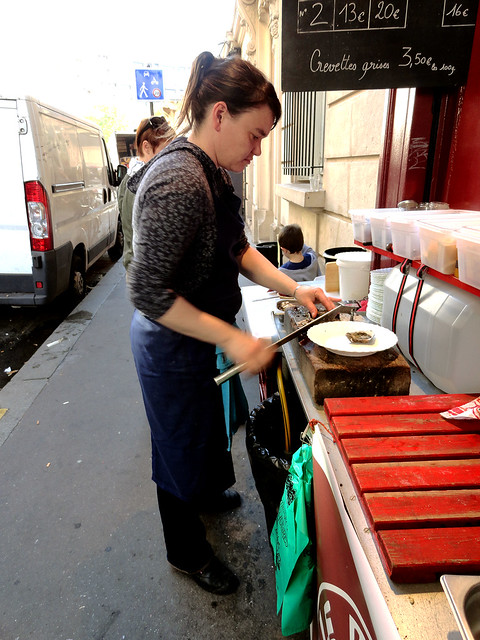 When people talk about finding “real” places to eat in Paris, places filled mostly with locals eating simple, excellent food (for not a lot of money), I imagine this is the kind of place they’re talking about. I loved watching the Frenchmen talk and gesture and slurp up their oysters, watching a woman stop in and chat with one of the shopkeepers as he refilled her bottle of wine from one of the barrels lining the wall.

Another perk: we ordered a liter of wine (…oops?) and since there was no way we were going to finish it during lunch (not if we intended to do anything else that day, anyways), the shopkeeper was happy to re-cork it and we took it with us. Came in handy for an impromptu picnic later! 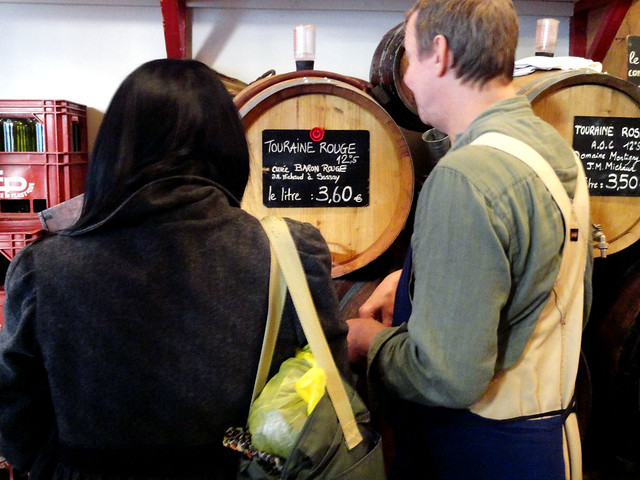 Two notes on dining in Paris
In my research there were two things I learned about eating out in Paris that came in extremely handy. First, prices at cafes change depending on whether you order food to go (or eat at the bar) or sit at a table. At Au Petit Versailles, we sat at a table to enjoy our lunch, but I heard one of the staff correct an American couple who ordered to go and then sat at a table “just for a bite” before they continued on. Part of the reasoning is that the higher cost of sitting at a table means that table is yours for as long as you want it–all day if you’re so inclined. If you don’t pay for a table, don’t expect to sit at one (though a stool at the bar is fine).

Second, reservations at restaurants are a pretty big deal, even for lunch and even at more casual places like Breizh. Dining out is like visiting someone’s home for a meal: you can drop in and be welcomed (though you risk no one being home or finding the table is full), but you’re much more likely to have a nice experience (and it’s much more respectful to your hosts) if you give them even a few hours notice that you’ll be by.

If you know you want to dine at a certain place, even if it’s a day or a few hours in advance, it’s in your best interest to try to make a reservation (the hotel I stayed at was a great help with this as well). That said, don’t let that dissuade you from just stopping into try your luck.

Next post: an amazing old-school Paris restaurant, my first escargot, and the several places we stopped at for drinks along the way.

6 thoughts on “Dining and Drinking in Paris (Part 1)”