First, a note–before I made this, Chicago was well on its way to spring. It was 70 degrees, my winter coats and gloves and scarves were all put away. The day this went in the oven? Four inches of snow. I don’t know if that’s an endorsement or indictment. You’ve been warned. 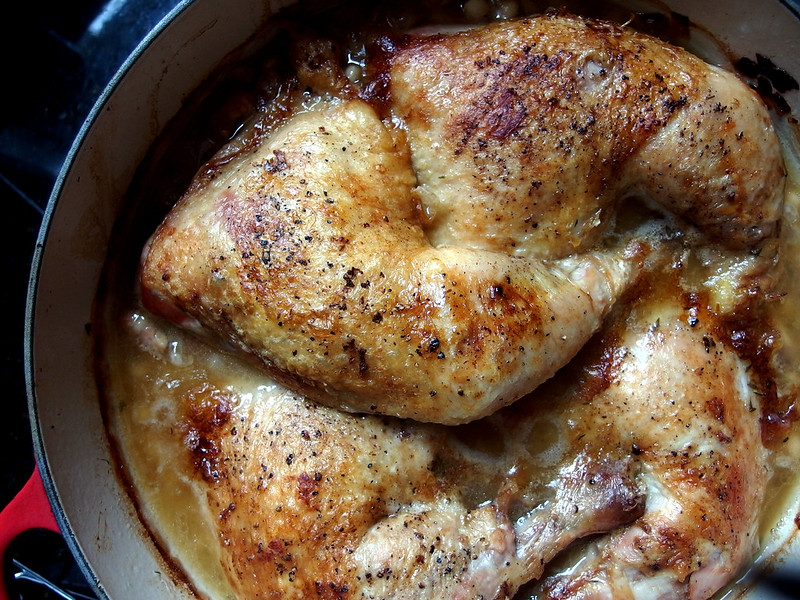 There’s a particular kind of meal best served out of the dish it was made in, at a table crowded with full wine glasses, ready plates, and even more ready appetites. The kind of meal that lends itself to lingering at the table long after the food is gone, though the glasses never seem to run empty.

After my trip to Paris last fall, I’ve (hardly unexpectedly) been on a French food kick and all winter, the one dish I’ve been craving, but never quite got around to making until last week, is about as French as it gets and, I think, perfectly speaks to that kind of meal–cassoulet. 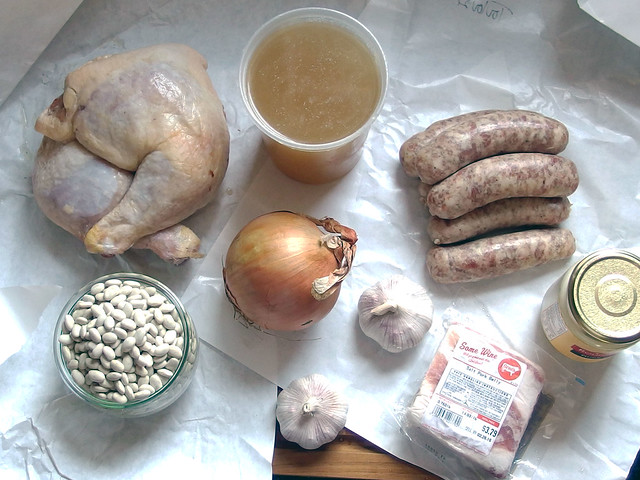 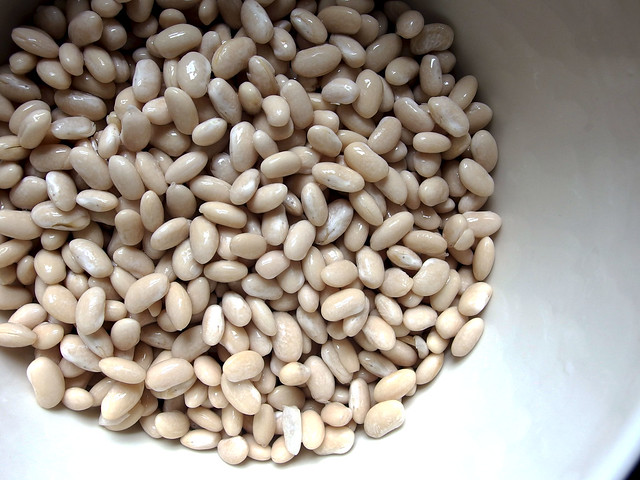 If you’re not familiar with cassoulet, it’s a rib-sticking, richer-than-stew but not-really-a-casserole dish of white beans, chicken or duck, sausage, salt pork, broth, and a ton of garlic. Every person who makes it has their own recipe–which is of course the “right” way (the right way usually coinciding with the way they had it growing up–though in cassoulet’s case, it actually has a whole academie). 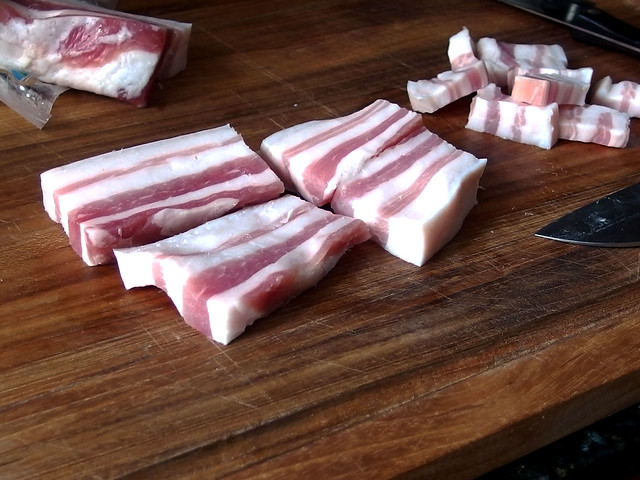 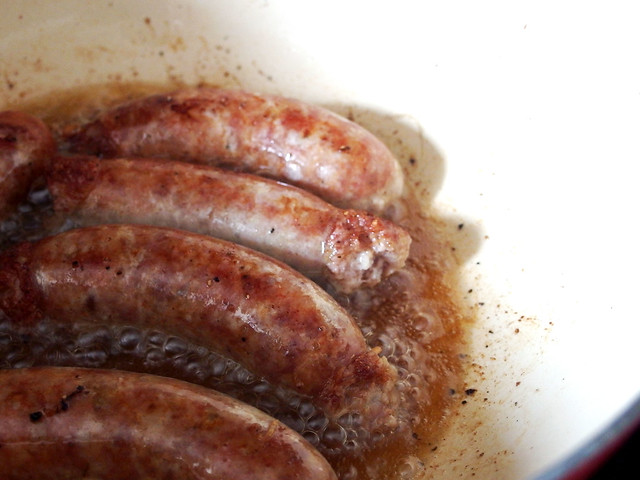 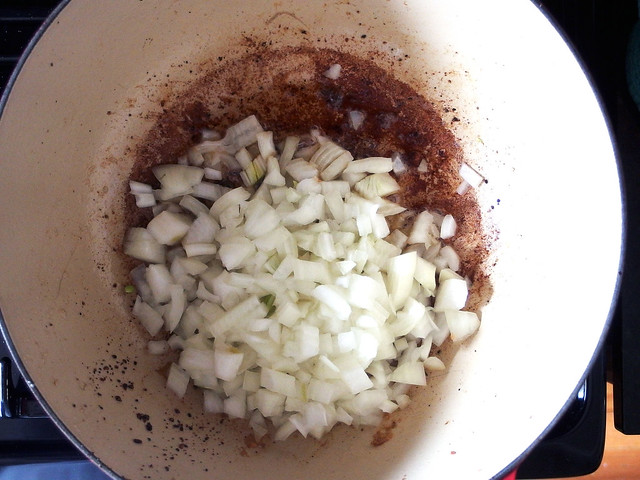 The dish has an intimidating reputation, even to me–see above re. L’académie Universelle du Cassoulet. There’s the duck confit (which many recipes include instructions to make yourself), a very specific type of bean, the multi-day cooking time, etc., etc. But it doesn’t need to be that complicated. I’m not advocating for a microwave version (I probably made a Frenchman roll over in his grave just by typing that), but, as with any dish borne out of using what you have and stretching it to serve a crowd, it can be–and was!–simple (and, if not exactly fast, at least doesn’t require a lot of standing-at-the-stove time). 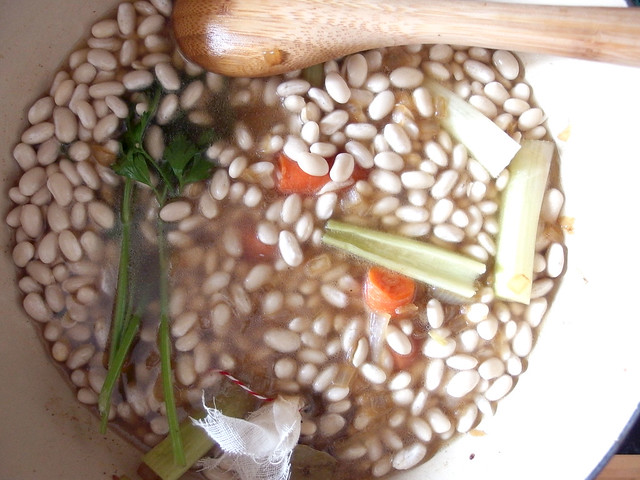 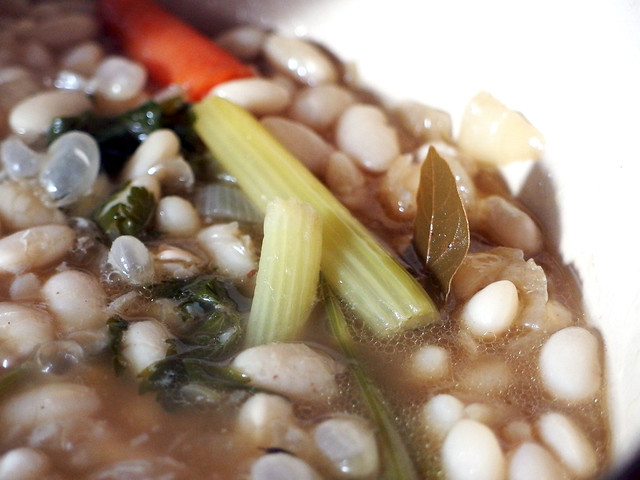 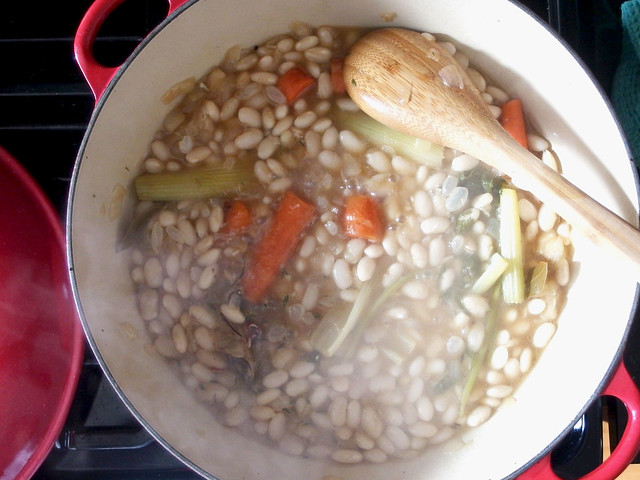 I’ve had this recipe kicking around since October, but my favorite part isn’t the recipe itself (though it’s what I used and what I modified below), it’s the article that precedes it. It addresses perfectly the intimidation factor and how to make this the way I imagine it was made at the beginning–with ingredients you have or can pretty easily get, allowing for adjustments as needed, and to your own tastes. And pretty much however you make it, it will be amazing.

To unintentionally prove a point, I actually screwed up when I made this. In hindsight, I should have added more water while it was cooking, there should have been a bit more broth-yness to the beans by the time it was done. Ideally the crust forms from the liquid, not the beans or chicken. Not a problem–it was still delicious (and totally devoured and I basically had to stop myself from picking off all the crispy chicken skin bits) and I will make adjustments next time. 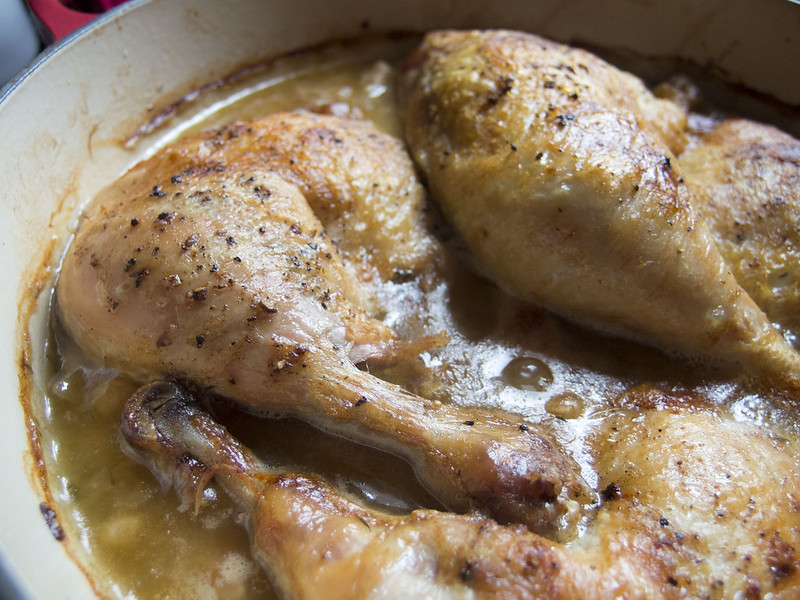 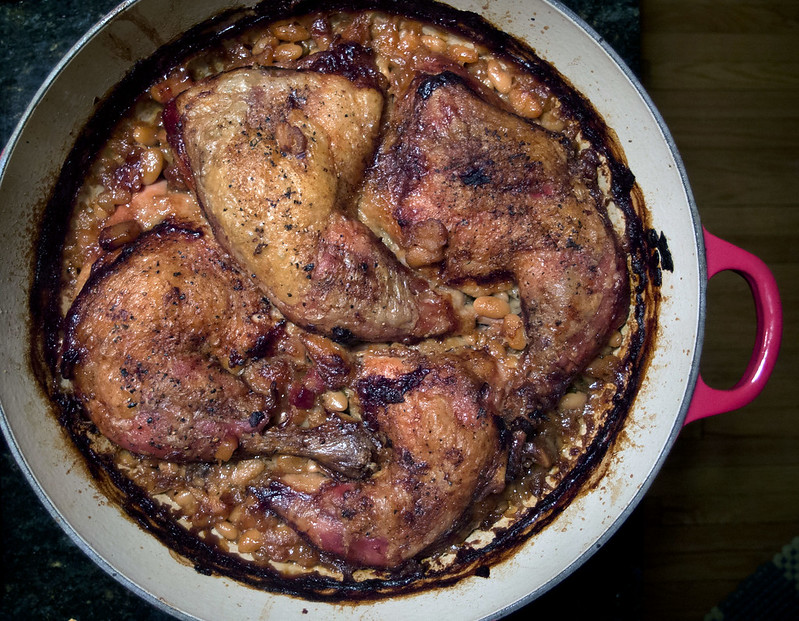 Cassoulet
For fantastic background, and an explanation of why you don’t need duck to make this dish, read this.

Put the beans in a large bowl and add the salt water. Cover and set aside for 12-18 hours. Drain and rinse.

Heat oven to 300 degrees and set the oven rack to the lower middle position. If using store-bought stock, pour it into a bowl and sprinkle with gelatin; set aside.

Drain off all but 2 tablespoons of the fat from the pot. Add onions and cook, scraping up any browned bits from cooking the meat. When the onions are translucent, add drained beans, celery, carrots, parsley, bay leaves, cloves (tie them into a bit of cheesecloth to make it easy to fish out later), and chicken stock; bring to a simmer. Cover the pot, reduce heat to low, and cook for 45 minutes or until the beans have softened slightly but aren’t yet cooked through.

Stir sausage and salt pork into the beans. Tuck the garlic head into the center of the pot so it’s easy to retrieve later. Nestle chicken, skin-side up, into the beans. The beans should be just covered with liquid.

Move the pot to the oven and cook for 2 hours, uncovered, checking halfway through and adding a little water along the edge of the pot if needed to keep the beans covered. After 2 hours, a slight crust will have formed on top. (If it’s not starting to look crusty, turn the oven up to 325 degrees.)

When the cassoulet is ready, the top crust will be dark brown. Fish out the garlic and carefully squeeze out the softened cloves, either adding it back to the cassoulet or spreading it on a piece of crusty bread. Serve immediately with a bottle of wine and a great big salad (this is also one of those dishes that’s equally good the next day).