You guys. I’m struggling to find the words. Tuesday’s class was the most tangible and immediate validation of my purpose for this blog, for nearly everything I do involving food: to give people the confidence to try something new in the kitchen, to show that cooking doesn’t have to be this big, intimidating, scary thing. 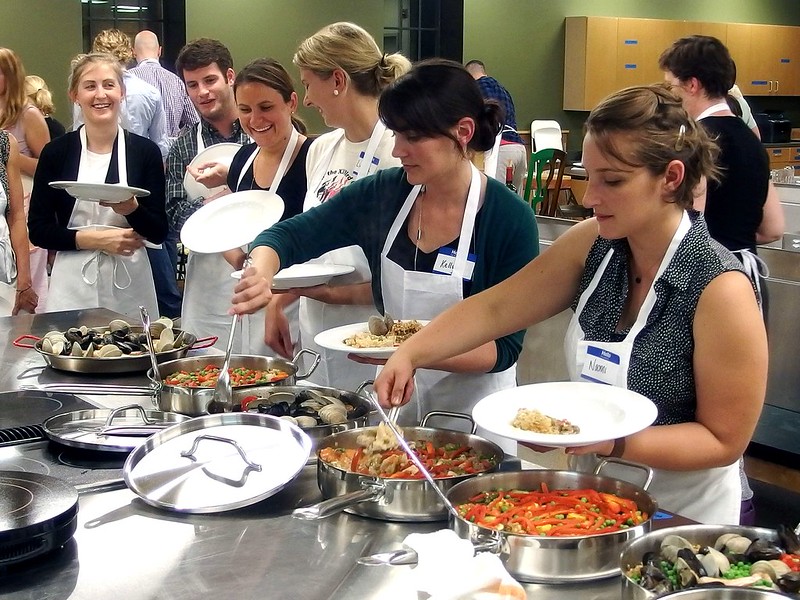 At the beginning of the class I asked who had eaten paella–nearly everyone raised their hand. Who’s made paella? One, maybe two hands went up. But by the end, every one of the 24 people in the class (plus the amazing volunteers who cooked the “teacher’s” paella) could say yes, they’ve made (amazingly delicious!) paella. And they could all do it again, too!

Watching each group proudly unveil the beautiful meals they created at the end of class, the impressed comments from their classmates–I wanted to give them all a hug and say “Look! You made that!” Everyone sitting together to share conversation and food (and wine, there were some amazing sangrias at the table) had me mentally shouting “YES. This is what’s it’s about.” (I mostly restrained myself on the shouting and hugging; I only had one sangria–a much-appreciated glass beautifully prepared and with a pretty little lemon twist by one of the groups.) 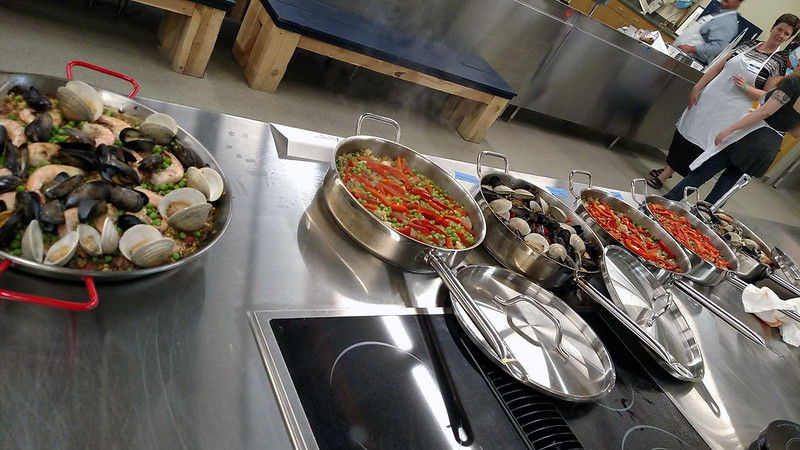 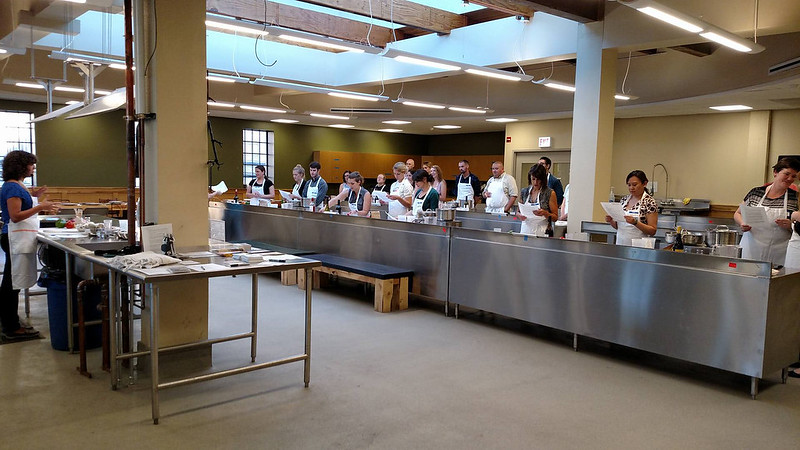 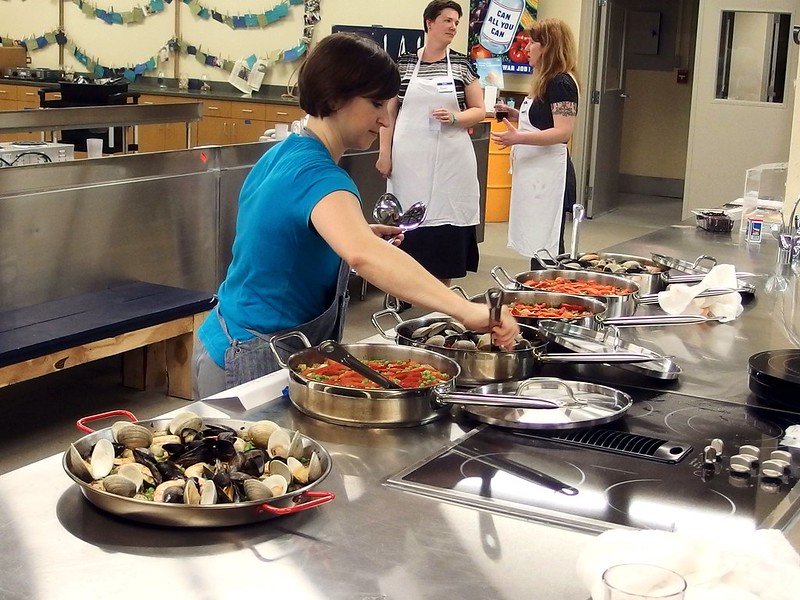 There were so many moments like that during the class, but this might have topped them all–one of the students came up to me at the end and told me she was really excited to try this at home. Then she said, “Honestly, I’ve had a paella pan sitting in the back of my closet for years and I’ve never used it. Now I have a reason!” Again I had to restrain myself from becoming a crazy hugging person, but I did tell her, “Yes!! You can totally do this!!” 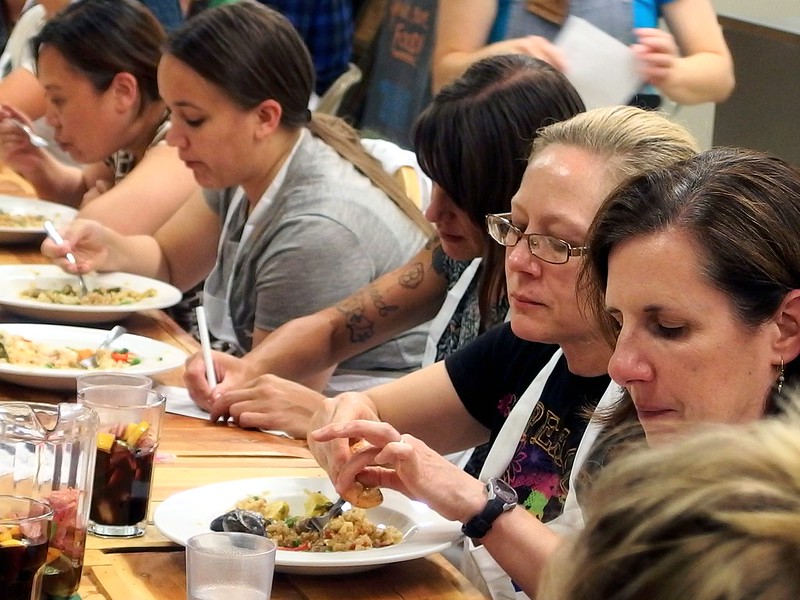 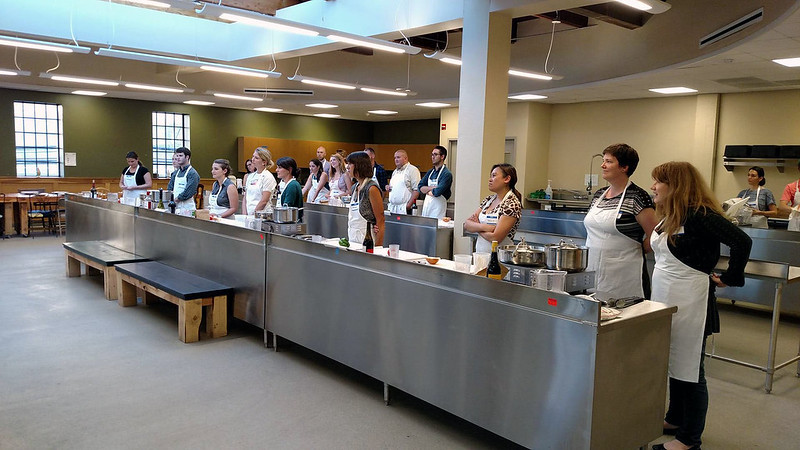 And the comments on the feedback forms–I want to frame them, and not for my own ego. The best comments said that this intimidating dish was actually easy, that they tried or learned something new. Two of my favorite moments from the class were showing everyone a whole cuttlefish and walking around to let people smell smoked paprika, and it’s so rewarding to know that the class got something out of those moments too.

And I learned something in preparing for this class! I’ve never cooked cuttlefish before this week, but I love the stuff now (it’s like calamari, but thicker so less chance it will overcook). I added some to a salad last night and it was amazing. 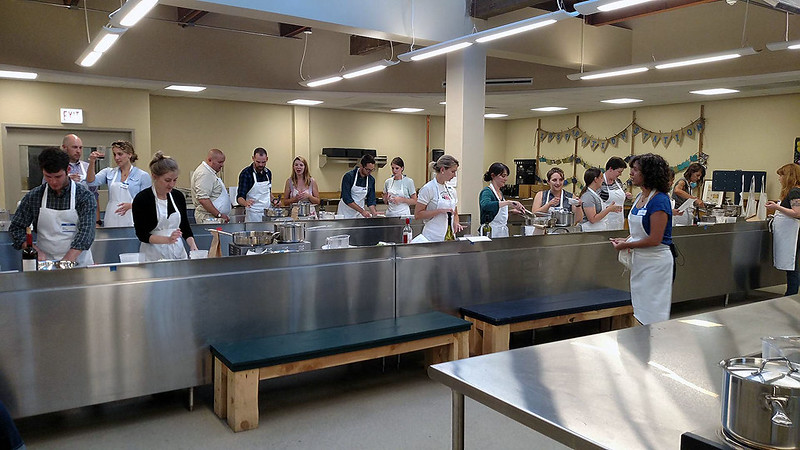 For me, personally, there was a moment too. As anxious as I was in the days leading up to the class, as soon as I got to the kitchen and started setting up–it’s cliché, but I felt my nerves melt away. I know my way around a kitchen and a cutting board, I know how to cook.

Beyond the actual cooking portion of it, the years of practice I’ve had running web presentations at my day job were also surprisingly helpful. The speaking came easy because I knew the story I wanted to tell. I knew how to handle questions and figure out if it bore repeating to the whole group; I could troubleshoot my slightly burned garlic or pans that were heating unevenly without panicking. There are definitely things that will improve with practice (like actually remembering I have a pan on the stove before the garlic burns), but for a first time, it couldn’t have possibly gone any better. 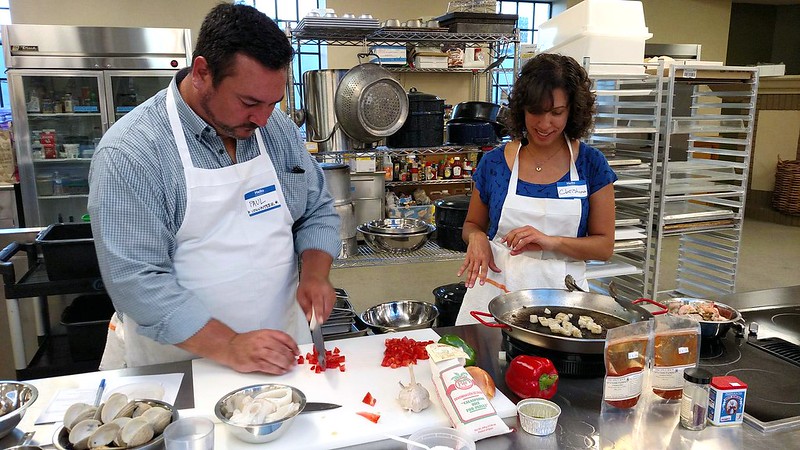 I also cannot say enough good things about the volunteers who did so much of the prep for the class (roasting the red peppers to steaming the seafood to cutting the cuttlefish and all the meat), who pretty much cooked “my” paella when I was busy teaching, and washed all the dishes. They (and Lindsay and Becky from PGP, who also get credit for most of the pictures) made the class happen without me feeling frantic. If you have a kitchen skill you want to share, Peterson Garden Project is the place to do it. 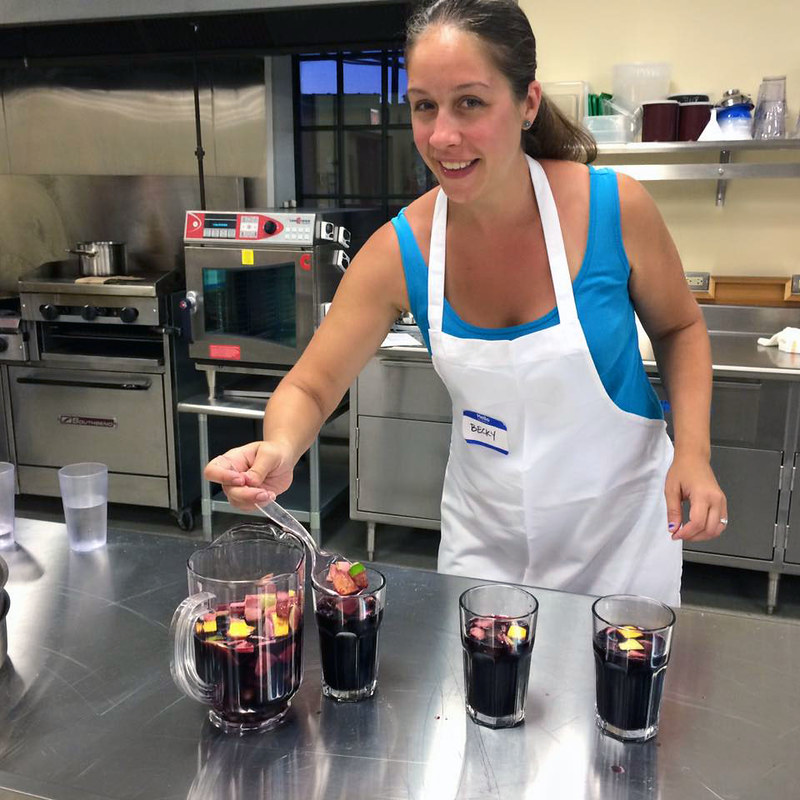 I’m already brainstorming more class ideas (and I want to do this one again too!) and can’t wait to share more with all of you.

Paella
As I mentioned earlier, the beauty of paella is you can use any combination of meats, seafoods, or vegetables you like. In class we made three types: seafood (shrimp, clams, mussels, cuttlefish, chicken, sausage), meat (chicken, sausage, carrots), and vegetarian (zucchini, green beans, carrots, chickpeas). The common ingredients for all of them were the rice, sofrito (onion, tomato, green pepper, garlic), broth seasoned with smoked Spanish paprika, roasted red peppers, artichoke hearts, and peas.

Steam mussels and clams over 1 cup of water until they open. Set shellfish aside. Strain the liquid into a measuring cup to remove any silt or sand, and add broth to total 6 cups. Keep the broth warm in a pot over low heat.

Heat a large paella or saute pan over medium-high heat. Add a tablespoon or two of oil and heat until shimmering.

Add the shrimp to the pan, salt and pepper generously, and cook until the shrimp are just barely opaque in the center. Remove from the pan to a plate.

Add a bit more oil if needed. Add the chicken, season, and cook until well-browned (chicken does not need to be fully cooked through). Remove to a plate. Repeat this process with the sausage, cuttlefish, and then the artichoke hearts. (Veggie variation: Follow the same process with the zucchini, carrots, green beans, and chickpeas.)

By this time, you should have a good amount of browned bits on the bottom of the pan. Turn the heat down to medium and add a little bit more oil, then add the onions and more salt and pepper. Saute until they’re very soft, the longer the better. Add the green pepper and saute until softened. Add the garlic and saute, but be sure not to burn it! Add the tomato and continue to cook until the tomato has broken down, the mixture is almost a paste, and nearly all the liquid has cooked off. (This mixture is called a sofrito.)

Add the paella rice and stir briefly to coat the rice with the sofrito. Spread the rice evenly over the bottom of the pan and add the sausage, chicken, cuttlefish, and artichoke hearts over the top (reserve the shrimp, clams, mussels for the very end). (Veggie Variation: Add the green beans, chickpeas, artichoke hearts, and carrots; reserve the zucchini for the end.)

Pour 4 cups of broth into the pan and bring to a simmer. No stirring!

Simmer the rice until it is just barely cooked through, it should still have a little “bite” to it. If the broth is nearly absorbed, but the rice is still raw, add ½ cup broth. When only a tiny bit of broth remains on the bottom of the pan, arrange the shrimp, roasted red peppers, peas, clams, and mussels over the top. (Veggie Variation: Add remaining vegetables). Allow to cook 1-2 more minutes then remove from the heat.

Cover with a towel and let rest for 5 minutes. Serve with lemon wedges.