I feel like stock trader yelling “Buy, buy, buy!!!”, but it’s the tail end of tomato season and I just figured out the best-tasting, easiest sauce I’ve ever made. And good thing, too, after I indulged my “but it’s on sale!” tendencies and bought 63 pounds of tomatoes (in my defense, I thought it was only 40, but nope, 63). 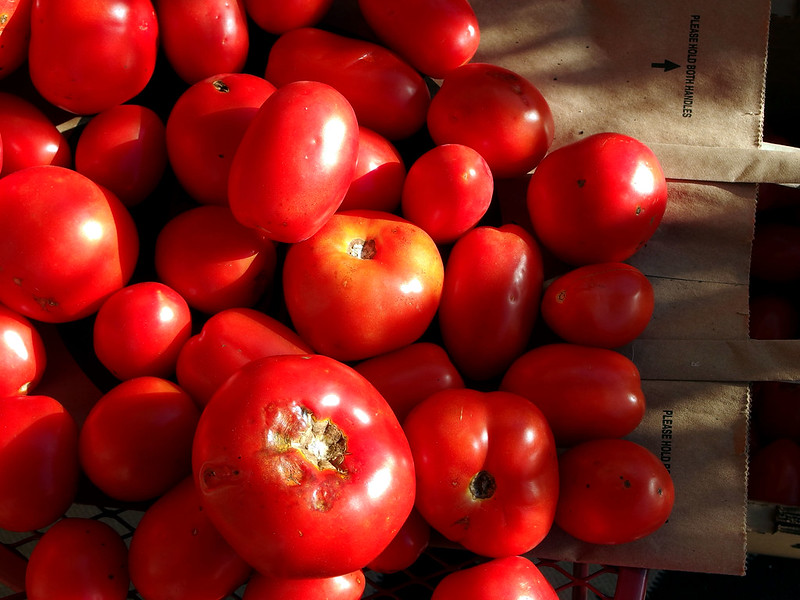 Since I first tried canning tomatoes based on the National Center for Home Food Preservation process, I’ve been trying to find ways to streamline things. This year was no exception and resulted in the easiest, least messy, most hands-off method yet. So easy that I honestly don’t know why I’d ever do it any other way ever again. Here’s how it works:

Congratulations, you’re done. Once the tomatoes are cooked, you can put them through a food mill or a blender, leave them in chunks, freeze or can them or eat them with a spoon. 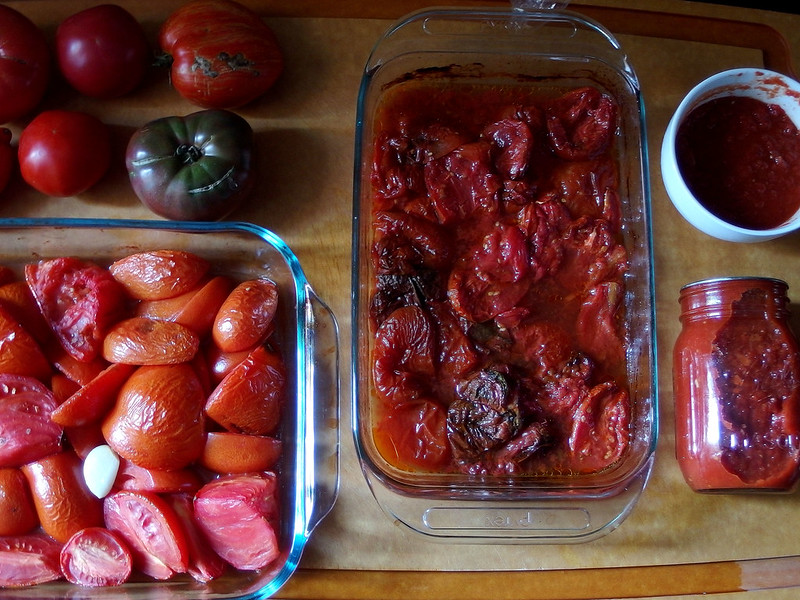 The basic difference between this and the NCHFP method, which most every canning or preservation book or website use: oven versus stovetop. And that makes all the difference. I’m talking about one pan, almost no mess, and minimal waste versus multiple simmering pots and pans, bowls of ice water, a mess across my counter, piles of tomato scraps, and hours of splattering and stirring. 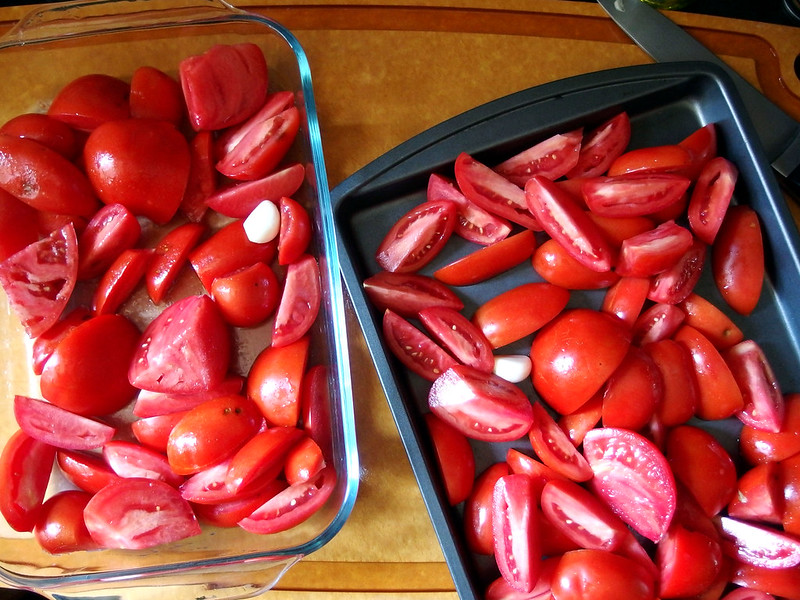 Yes, I sound a little like that infomercial with the guy who can’t eat a bowl of popcorn and hold a soda at the same time, but I swear, this really is so much easier. This method eliminates the three things I hated most about the traditional method of processing tomatoes: 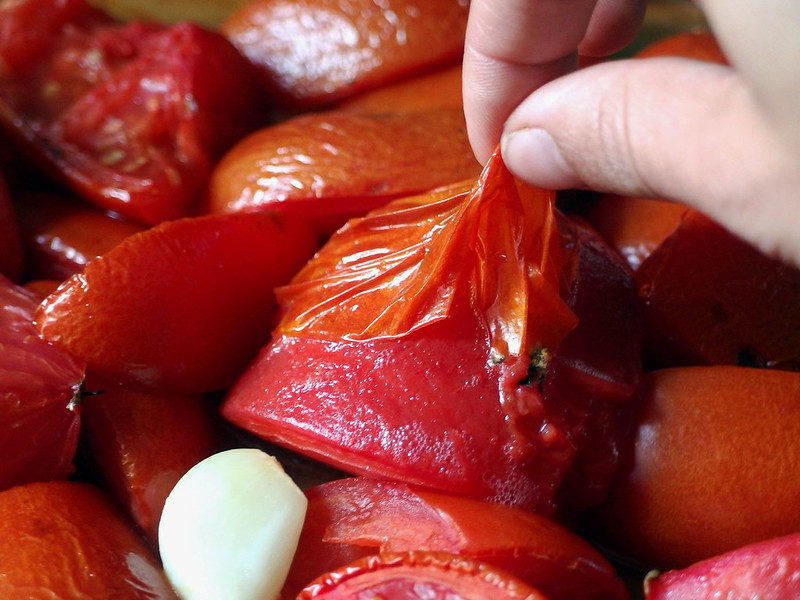 This also tasted better than any other tomato sauce I’ve made. Combining the large surface area of a roasting pan with dry heat of the oven (if you have a convection oven, so much the better) means the water in the tomatoes evaporates faster and more effectively than in a pot simmering on a stove. And that means much more concentrated tomato flavor in less time than it would take on a stove. Plus, especially if you use a large sheet pan like the dark one above, the sugars start to caramelize around the edges as the water cooks off, adding incredible depth, richness, and sweetness to the sauce. 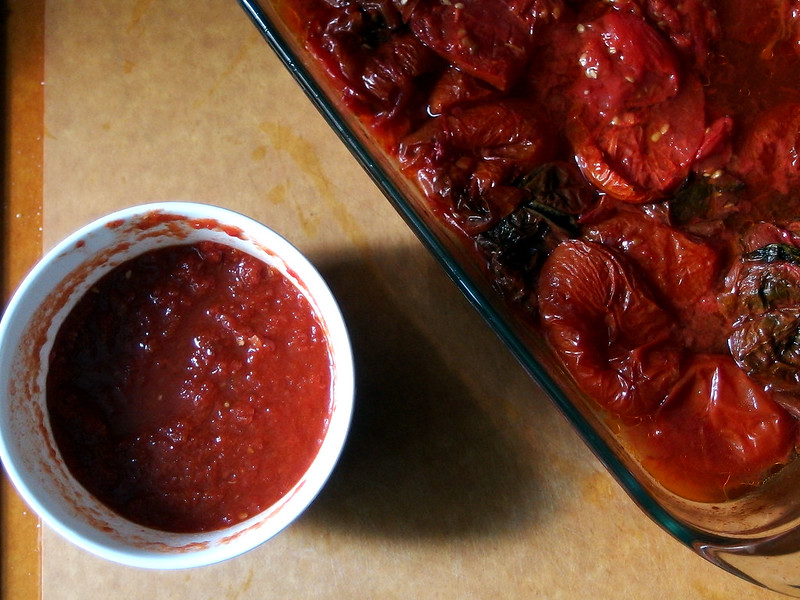 I’ve already eaten this on pasta, as a base for baked eggs, and finished off that little bowl standing at the counter with a spoon. I cant wait to use this in chili, to make tomato soup with grilled cheese, spaghetti and meatballs….Do you think it would be totally crazy if I bought more tomatoes this weekend?

Easy Tomato Sauce
I’ve used this process for anywhere from 3 pounds to 30 pounds of tomatoes and it works great no matter how you scale it. I don’t add salt to the roasting tomatoes; I find I have better control when it’s added to the final sauce before canning or freezing. And incidentally, if you cook this down long enough, you’ll end up with homemade tomato paste, which is so good.

Wash tomatoes and cut out any bad spots and any bit of core. Halve small tomatoes, quarter large ones.

Put tomatoes in whatever baking sheet or roasting pan you have (4 pounds per large pan works nicely).

Drizzle with a bare minimum of olive oil, add a peeled clove of garlic if you want (if you want to can this, 1 clove per 5 pounds is safe according to the proportions from Ball’s seasoned tomato sauce).

Roast. After an hour or so, take the tomatoes out of the oven and the skins should slip right off.

Continue roasting until they’re cooked down as much as you like. Check on them occasionally, give the pan a shake, make sure nothing is burning in the corners. Do scrape any dark brown caramelized bits back into the tomatoes, this is pure flavor.

For halved or quartered tomatoes: Take tomatoes out of the oven while they still hold their shape pretty well but aren’t swimming in liquid, about 2 hour total.

For crushed tomatoes or sauce: Pour tomatoes through a food mill, process in a blender, or mash with a wooden spoon to your preferred consistency.

For waterbath canning: Pour tomatoes (quartered, crushed, or sauced) into a large pot and bring just to a simmer. Funnel into hot jars and follow the acidification and timing instructions from the NCHFP.